Why so many people fail in their new role

Many newly promoted individuals fail in their new role although they have been highly successful in the past. This can often be traced back to a mismatch in key traits between the individual and the new role. The 2×2 success matrix identifies two dimensions which are critical for success, namely the aversion towards change and the individual’s state of mind. Experience has shown that most individuals can be classified in exactly one of the four quadrats of the 2×2 success matrix. Only if the role the individual is supposed to fulfill falls in the same quadrant can he or she be both successful and happy.

Have you seen successful people being promoted into new roles just to fail shortly thereafter? Or, people hired because of their excellent record of accomplishment in one area just to be ineffective in their new role? If so, you are not alone! Indeed, this is unfortunately a common observation. And there is a simple explanation for it – which I call the 2×2 success matrix. 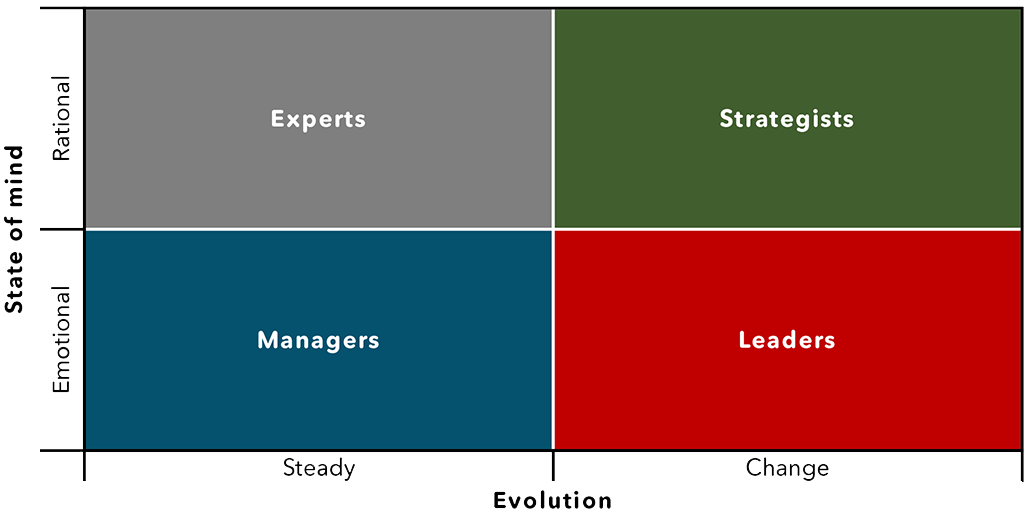 Managers prefer steering a running business rather than change what is already working. They favor the people aspects of their job over getting their hands dirty. Typically, CEOs and line managers fall into this role category.

Managers are critical for successfully running a company. But they lack the skills and interests for leading and implementing change.

Leaders are entrepreneur type of individuals. They excel at motivating people to change, to evolve, to be creative. Rather than focus on content, leaders exhibit a preference for people. They excel at identifying people with the right skills needed and love to move the company forward.

Experts are typically individuals that like to use their brain and / or hands to get things done. They bring experience and subject matter expertise onto the table. Without them, no company could survive. But they are neither interested, not good at managing people. And they are averse towards change.

Strategists are individuals that excel at designing change. They are capable of imagining how the future could look like. They love to work with their brain, are creative, and like to experiment with change. For strategists, it is important that they can contribute their knowledge to shape the future. Very often, consultants are good strategists.

Although possible, I have rarely seen people successfully evolve from one quadrant of the 2×2 success matrix to another, although many have tried. At best, moves between quadrants lead to unhappy employees. And at worst, failure to consider the 2×2 success matrix, leads to individual and company failure.

Experts, being promoted to manager because of their contribution to success, are often unhappy in their new role. They tend to become micro-managers as they try to recreate what there are good at, that is, doing the job, in their new role.

Troubled companies need to move their CEO from the manager to the leader role. Without hiring a new CEO, this undertaking often fails.

The worst transition that I have seen are strategists being promoted to managers. Just look at the number of failures of ex-consultants being hired as CEOs into the firms for which they have developed strategies.